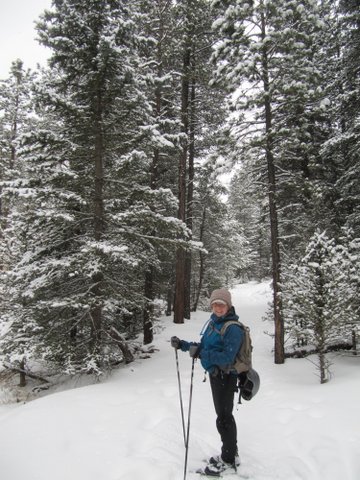 In spite of only 7" in our yard, we decided to check out Los Griegos on Thursday.  We broke trail under mostly cloudy skies with intermittent snow showers, in a couple of inches of new, over a packed track.  Unpacked snow at the sides of the trail was 18+".  First picture shows Frances near the trailhead.

At Griegos Junction (GJ), we took a short break on "Lunchbreak Log," where coverage was very thin.  IMG_3435 is the view at GJ.  We then broke trail through nearly 2' of powder down Lower Road (LR) to its intersection with Elk Ridge Trail (ER).  ER can be pretty fast, but our descent was slowed by the abundant, untracked powder.  There was only a single, adrenaline-driven bailout, unaccompanied by the usual expletives. Even lower ER was pretty mellow with wide, powdery sections where it was easy to stop or slow down.

That night, it was hard to sleep, knowing that, with ER so enjoyable, Squirrel Canyon (SC) would probably be very good also.  So, today, Friday, we made another trip to LG.  We varied our ascent a little by skiing up LR above it's intersection with Ladera.

This was a kind of trip down (up?) memory lane for me.  It was on this section that I first heard the name "Sam Beard."  Many years ago, when I just getting into XC skiing, I caught up with a group of NMCCSC members, who were skiing up this section, and asked them who was responsible for this great network of trails.  Before long, I was "swamping" for him!

In any case, we broke trail up LR in 2' of powder.  By following an indistinct track that had been laid down before the recent storm, the task was made a little easier, but we were huffing and puffing by the time we got up to our track from Thursday.  There are a few sun-exposed sections on this part of LR, but, overall, it's pretty shady, and in that shade the snow is still excellent. 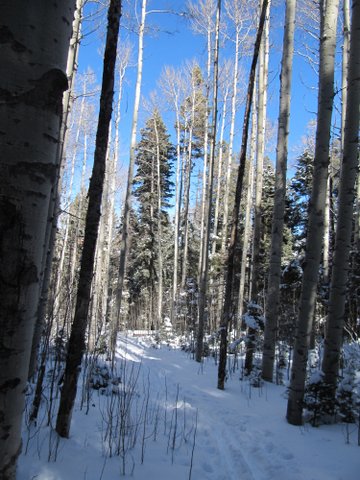 GJ  was thinner yet today, but when we moved away from the "Lunchbreak Log," the depth increased to 18-24".  After Clif Bars, we decided to ski up lower Upper Ladera and take a powder run down that section from which Sam and his crew had removed so many aspen shoots.  On the second run, after removing ice from Frances' skiis, we BOTH had exhilarating runs down that section (see right).

Then, it was on to untracked SC.  SC has some sections that intimidate me under normal conditions, but it was mostly very mellow today in the deep snow.  SC was a little more work than I'd imagined due to the snow depth.  This "heavy skier" WAS able to overcome the "heavy snow," and managed to feel a few rocks underski.  The trail is well-shaded from the sun, and I suspect that its condition will remain good for awhile.

Conditions on the shortcut from Upper Road to LR were marginal, as was the trip on the south side of Black Dog Canyon.

All in all, it's the best Jemez skiing in my memory (I know, I know!), for at least the past three years.  Roads are clear, and the trailheads have either been plowed or have thin snow.  FRs 289 and 280 are behind locked gates.

It was impossible for me to ignore Tom Broadbent's siren song about the 5" at La Cueva, so I set out on Ladera Monday ~noon.  Indeed, there was ~3-5" - plenty to ski on.  Attached is a GPS track of my tour.  I hadn't skied Ladera in at least 2+years, so my track is not the smooth continuous curve that you might expect, and some occasional bushwacking was required to get back on the trail. 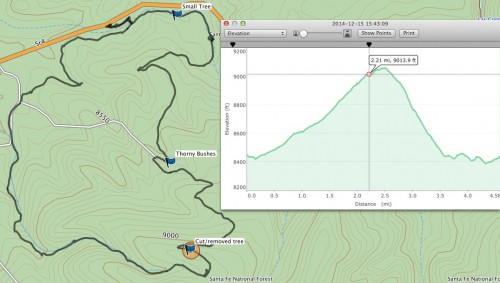 Map and track by Mike Meier

The snow was unbroken, and a pleasure to ski, but it took me a lot longer to get up to Griegos Junction than in years past, due to advancing age, deteriorating physical condition, removal of a tree, and Maxiglide malfunction.  (To my unjustified surprise, liquid wax dries out to a solid, hard-to-apply substance after a few years of neglect.)

The snow conditions were pretty much the same at Griegos Junction as at the trailhead, and I chose to descend very slowly and tentatively down Squirrel Canyon.  There were a lot of scritches and irregular features under the thin cover, justifying my fear of falling and cautious approach.   For some of the steeper and rockier sections, I just removed skis and hiked.  There were a few nice sections where it was possible to cruise along with reckless abandon, sort of.  South-facing Black Dog Canyon had coverage as good as the rest of the trail.

Los Griegos (LG) had the best coverage that I observed on the drive from Los Alamos.  Coverage at trailheads to the east (Corral Canyon, Coyote Call, Upper Frijoles) looked to be too thin for skiing.  Parking at these areas, and LG were unplowed, but access was easy.  The otherwise abundant parking at LG and Corral Canyon has been greatly reduced by the large piles of gravel there, that I suppose are being held there for road construction projects.

At the bottom of the meadow near the trailhead (intersection of Ladera and Black Dog Canyon trails), a big tree has fallen, but it's an open area, and the tree is not an obstacle.  Another, smaller tree is a few hundred yards up Ladera, is easy to get around, and is indicated on the map.  I had hoped to get back to it with a handsaw, but Starbucks was calling, and I was pretty pooped by the end of the trip, so maybe next time.  Some thorny bushes are indicated further up Ladera, and we may want to take a lopping shears up there in the future.  A 6-8" tree was blocking Ladera just below Griegos Junction, and was not easy to bypass.  I was able to make a single cut and remove it from the trail.

All in all, it was a good start to the season.