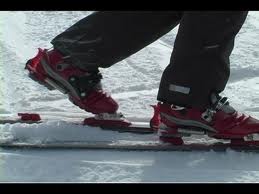 We had a thread recently on our NMCCSC Facebook Group Page recently that those of you interested in improving your skiing without compromising your safety should read. It talks about X-C Ski injuries and ski bindings. Here is an excerpted version of the thread.

The best research shows while releasable binding has helped protect against ankle and lower leg injuries , they have done little to protect against ACL/knee injuries. Lots of us do backcountry skiing with AT and telemark gear. The releasable AT binding were touted as the route to protect your ACL, because the bindings are supposed to release before the forces of a ski error rip your ACL.

This has been shown to be false. The ACL usually rips before the releasable binding releases. Most commonly, knee injuries occur as the skier catches the inside edge of the ski during the fall, causing sudden external rotation below the knee. In the process, the ACL deep within the knee snaps before the skis binding release can be triggered.

AT binding ski boots have a lot of advantages over telemark or front hinge bindings: better control , faster learning curve, technique that is familiar to a lot of skiers, no weight gain over telemark equipment and, as previously mentioned, more protection from lower leg and ankle injuries. Telemark and BC front hinge bindings seem to offer more knee/ACL injury protection in all but the most stiff telemark bindings/boots. Without the heel locked down the knee can immediately adjust to pressure in a large number of ski falls. This is shown in the medical literature many ski related knee injuries when alpine bindings vs telemark bindings. According to one expert, “after 10 years of mountain rescue on a ski patrol in 4 different resorts, I certainly can tell you that telemark skiers are less prone to injuries."

Ok these are ski stats from Scotland. But still, it clearly shows telemark is less prone to injuries than any other snowsports. Overall, most experts would agree that telemark skiing has a lower injury rate than both snowboarding and alpine skiing, perhaps because the free-heel allows falls to occur with less torsional damage on the lower limb. While this is still a highly debated subject and needs more more research , it is pretty well accepted that with a looser x-c binding you have some ACL/knee protection advantages. This protection may diminish with the stiffer Alpine like tele bindings and stiffer boots.

The point of this article is not to recommend AT over telemark gear. I've skied with both. Rather to consider individually which might work best for your knees. If one is a skilled Alpine skier who wants to pursue backcountry skiing and has strong healthy knees , they might be well served by AT gear. On the other hand if one has years of x-c/telemark experience , with little alpine experience , previous knee/ ACL injuries, then going to AT gear is not necessarily going to afford you full knee protection.

Without question AT gear most often offers a skier a stronger platform for performance BC skiing. Conversely, one can do a lot with moderate telemark gear, and not limit themselves to the tele stance but also do alpine turns as well as quick transitions from downhill to uphill which one often finds in BC skiing. Good luck if you are choosing a BC ski platform.

Ironically, the lightweight aspect of tele gear has been eclipsed by AT gear. Even I, a pinhead for 35 years now, am being drawn towards the AT flame. Ski weight is equal across the disciplines, unless you're talking about true feather-light skimo skis, but AT boots and bindings have continued to lose weight, while tele gear has stagnated. Even my beloved BD decided to back out of the tele boot market last year. Pairing an AT boot for soft snow/pow conditions and a tech [AT] binding can save over 2 pounds per foot. What's that adage, a pound on the foot is like five on the back? And even though I've always been a better tele than alpine skier, wider skis have allowed me to alpine more and more on my tele gear, until it's 4th and long in the black bumps and I have to tele.

Regarding research which shows tele is safer than alpine - please share some links to the research if you have them. I wonder how many data points they have for very active [modern] tele bindings, like the Hammerhead, BD 01/02, et al. with 3-4 buckle plastic boots. State of the art tele bindings, which I love and ski for the control and power, are almost scary in how locked and rigid they hold the heel down on the ski. Power corrupts, indeed! Even a contemporary semi-active binding like the Voile Switchback has gotten more active [a.k.a. potentially more dangerous] with their second generation. IMHO, Rottefella NTN Freedom/Freeride or 7 TM bindings raise the level of protection even more for tele bindings because they are essentially the only releasable tele bindings on the mainstream market. Note: when I attend my PSIA instructor clinics, the tele god examiners from CO all come with releasable tele bindings, since their ski area employers require they ski/teach in tele releasable binding. Since we're sharing anecdotal tales here, quite a few of my bad-knee aging tele friends now ski on AT/alpine gear because they feel it's easier and nicer on their knees. However, I'm sure YMMV.

That is why what I wrote is that moderately stiff x-c country and tele offer greater protection for ACL knee injuries in most cases, with lots of qualifications. I also stated that stiffer binding ( more active) and stiffer boots diminish the protective benefit of the loose heel. So yes if you go for super stiff boot binding combinations you are likely to get much of said benefit from above. However my chili binding and Garmont excursions offer me a fair amount of flexion. For the very reasons you mentioned (safety) I would go back to AT setup before super stiff telly gear. Although I can see the attraction with the power.

The wear and tear seems a large part due to the "lunges" by the medical lit. I did not imply that telly is any safer overall. I don't know, as conflicting data and personal opinions. Some of the literature out of Taos, and suggest Telly has a higher overall injury rate than Alpine. My article was limited to most knee/ACL injuries. One needs to consider that Taos will have a high percentage of Telly skiers on stiffer boot/binding combinations over a place like our beloved weak peak.

You can refer to http://www.ski-injury.com/specific-sports/nordic. Also you can google "acl injuries occurring before alpine binding releases." None of this is hard double blind experimental design, by the very nature of the beast, almost impossible, but you uses what data you have and consider all the non mentioned factors ( as above Taos skier equip. average stiffness vs. sandias) and stated variables and draw your best tentative conclusion.

Per the link above... [why injury rate for tele is lower than alpine] "...perhaps in part due to generally slower ski speeds (hence less force on the ligament and less damage).

Plastic boots ...reduce the likelihood of an ankle injury which has always been a risk with leather boots. However, as happened in alpine skiing when alpine boots went through a similar change, the reduction in ankle injuries has been at the price of a rise in knee injuries..." After reading that article, all I can come away with is that skiing slow is safer than fast and plastic boots tend to move injuries up to the knee. Not sure how anyone could deduce that a non-relesable tele binding, driven by a plastic boot, is going to be safer than an alpine/AT binding which usually has two modes of release. That's why I now use NTN at the ski areas. If I ever blow out my knee, probably a matter of when than if, I'd make sure any binding I ski with [on metal-edged gear] is releasable. There's probably one other thing that drives people's equipment decisions about safety... the high cost of a good boot/binding system. Another topic for another day....