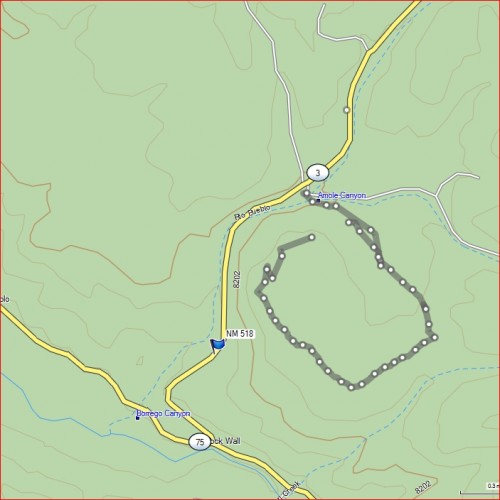 Sarah and I followed Sam Beard's direction to the trailhead.  Located 14.3 miles south of the intersection of NM 68 and 518 at Ranchos de Taos, a little west of Sipapu Ski Area.  The trailhead is at about 8,200 ft.  We climbed only about 200 ft. to the top of the loop.  The total was about 3 1/2 miles around.  Very nice cruising.  Saw about 8 vehicles out at the trailhead, mostly skiers.  The snow was bountiful (2-3 ft.), but quite wet and heavy.  Not like the Enchanted Forest the day before.

My gps missed some of the loop.  It was partly marked by blue diamonds nailed to the trees and partly just followed some faint tracks.  I had done that same loop a year or two ago.