The "Barry Ritchey Brazos Cones Redux” for today was scrubbed due to the closure of a US64 to the trailhead.  Not wanting to waste a sparkling clear morning, Barry and I met up with Barry’s friend Doug to ski “Big T”, a popular backcountry area just outside the boundaries of Santa Fe Ski Basin.  We parked at the Aspen Vista turnout on the road to the Ski Basin (elev 10,000’) and began to skin up through the trees.  We acquired one additional ski partner, a twenty-something tele skier who was inexplicably skiing in gaberdine dress pants.  To each his own, I guess. 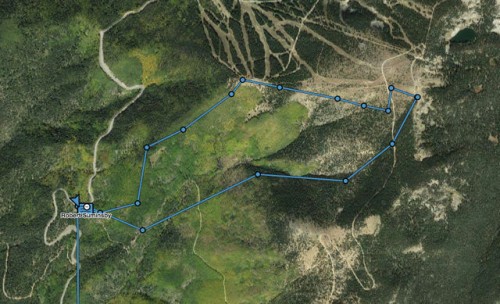 The route up was nothing short of beautiful….sparkling facets on top of 12-15” on light, fluffy NM powder.  The skin track wended it’s way up through Aspen groves and stands of evergreen, occasionally opening up into meadow with sweeping views to the S and W.  Eventually we hit the boundary of the ski area, and roughly followed that boundary rope to the antennas at the top of Tesuque Peak at just over 12,000’, a 2000’ gain in just over two hours.  After ripping skins we descended off the peak into the drainage.  The trees were very tight in places, but the snow for the most part was fantastic.  Unfortunately there was little or no base under that foot of fresh powder in places, so we encountered a number of rocks but avoided any serious damage.

The descent back to the Aspen Vista Road took about an hour, as we carefully picked our way through trees and tried to avoid getting sucked too deeply into the drainage which would result in a long slog out.  Just before hitting the road we encountered a couple snowshoers heading uphill, the only other people we saw during the descent.  Big T can swallow up  a lot of skiers.  Once we hit the road it was the circus you’d expect on a beautiful day on a holiday weekend…throngs of XC skiers and snowshoers.  As the road slopes fairly continuously downhill back to the parking area, we were able to ski/skate the rest of the way back to the car in no time.

None of us took any pictures, which is a shame given what a pretty day we had.  The aerial photo below shows our rough track (clockwise) through the terrain.