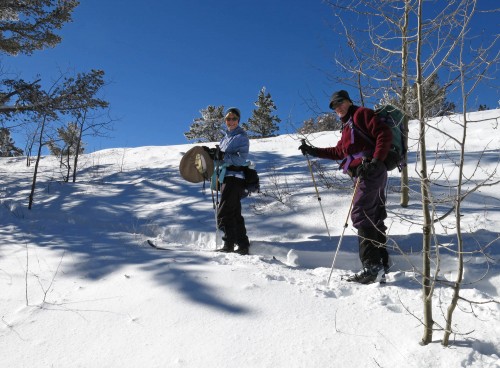 Today, 6 of us had a fun time skiing in great conditions, better than I had expected and I feel certain it will not have deteriorated by tomorrow so get out if you can. We mainly just did Switchback off Ellis and upper service road near crest house parking. Did a fair amount of socializing as we kept running into other club members who were out on their own a little later.

Geri Newton added "I also enjoyed the great snow and worked hard trying to get those snow legs back. Ran into various ski club members along the way.  Ps ....If anyone happened to pick up my `Great Old Broads` hat, I'll be happy to drop by to  retrieve it. If not, I'm sure it will enjoy it's new home. Merry Holidays and looking forward to the bus trips. Oh, thank you to all of those who added the new trail signs. Very fine job!"

To which Dave Gabel replied "Was it a blue ball cap type hat?  If so, we saw it in the middle of buried cable trail and moved it to the side." 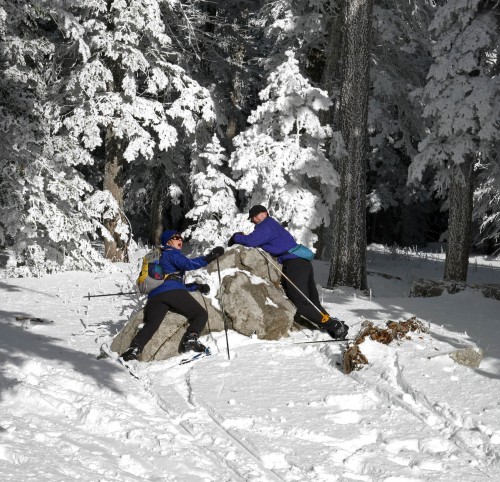 Geri, "Yes."  No word on whether it was recovered. But the trail work really was nice.

Reports from others were to hold off on Rocky Point trail...some exposed rocks, Gravel pit was doable but also some rocks showing. Ellis Service road is fine but thinner covering than trails in the trees. Switchback was the best.....nothing exposed to scrape your skis except one rock you can easily ski around. Its on the upper part of switchback between the sharp left turn and before junction at buried cable. Just ski on the right side of tree...tracks are there....and you'll bypass the rock.