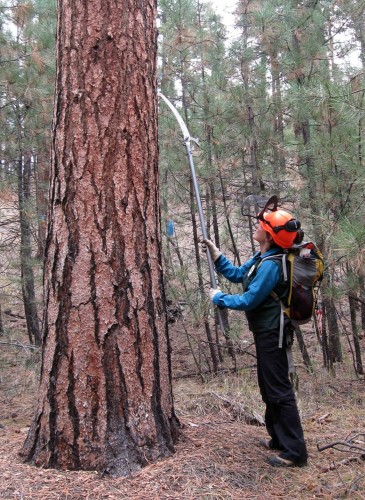 Bet Gendron removing a blue diamond from a large pine.

Several years ago the Copar Company from Espanola operated the El Cajete pumice mine on the Jemez Ranger District (JRD) in the East Fork area. After the mine was closed, Copar reclaimed the site by contouring the surface and planting grass and pine trees.

The site is now enclosed by a barbed wire fence, and this area is closed to public entry and to cattle grazing to protect the grass and small trees.

At a meeting in the Jemez Ranger Station on Monday, October 26, attended by Sam Beard (Ski Club Trails Chair) and members Carl Smith and Bet Gendron, Jeff Harris, JRD Recreation Staff Officer, described the above situation and stated that the JRD was very concerned about the trespass on the reclaimed site. The Club members stated that this trail was seldom skied in recent years due to poor snow conditions.

The result of the meeting was that Sam would email the following information to the Club members:

Club members are encouraged to ski other trails in the East Fork and Los Griegos Areas. For information about the numerous trails in these areas, please contact me or consult my trail guide, Ski Touring in Northern New Mexico.