New Gear Resources for XC, BC

This article will be limited to new gear sources in the  Albuquerque , Santa Fe and surrounding community as well as some online sources and  a few exceptions of places we may frequent, like Durango and Toas. Muchas Gracias.

Tele and AT Gear in central New Mexico

In the Albuquerque area x-c touring gear can be obtained from retailers REI and Sportz Systems. They both carry some BC gear on the lighter side as well as some snowshoes . Sportz Systems carries a limited selection of AT gear (some boots, binding and Skis). Most of the AT and telemark skis are interchangeable. Neither store sells telemark boots/ bindings. REI has AT boots and skis on line that can be shipped to the ABQ store free or to your home. Both stores sell clothing and accessories. 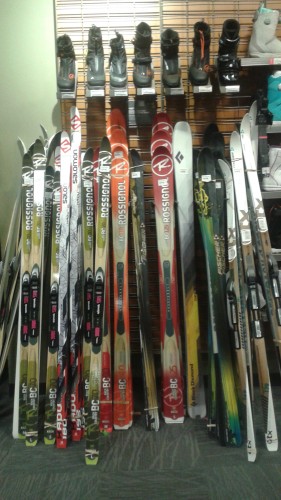 Photo by Gordon Eatman. Ski and boot collection at REI.

Also, in the Albuquerque area we have a relative new store that sells some new as well as a lot of used gear: OutdoorREGear at 4201 Yale NE, Suite D. They are in the building complex where the Stone Age Rock Gym use to be. I spoke with John , the owner, and they get new as well used x-c , BC, some AT, Tele, splitboards, skating skis , snowshoes as well as boots for the above. They also have packs and clothing. Since this covers so much of what we do, I have included them. Their phone is 344-1336; their web site: gearhead@outdoorREgear.com . They are not a dealer for gear but a consignment shop with a lot of new or as new gear.

Along that vein I would be amiss if I did not mention the annual ski swap where a lot of new as well as used gear and clothing are exchanged. The Ski Swap is held at the Manuel Lujan building on the NM Expo grounds in the fall and is sponsored as a fundraiser by the Sandia Area Ski Patrol. 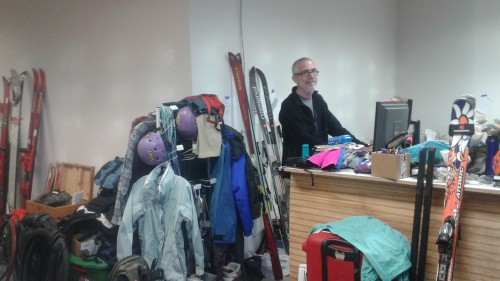 Photo by Gordon Eatman. Owner John at the register of RE Outdoors.

In Santa Fe REI does carry some AT gear ( some boots, bindings and skis) in stock. They also have BC gear in stock as well. The touring gear at REI in Santa Fe has to be ordered on line.

Alpine Sports in S.F. has some AT gear ( boots, binding, skis) as well as split boards , snowshoes and clothing / packs.

Kelly in Santa Fe has a building and carries some new as well as used gear. Here is his Janurary 2015 summary:

I have the largest XC/BC shop in New Mexico.  I don't do AT or Tele (alpine) as they are both too trendy & overpriced.  I do sell/mount release Tele bindings (Voile) on older alpine skis and Backcountry skis.  I have a huge selection of new and used touring and recreational boots and skis, specializing in three pin and NNNBC.  I usually mount bindings for free on the same day as purchase, and allow trade-ins and exchanges of used gear.  I have lots of new aluminum XC poles for only $23.  I have a large selection of waxable BC skis under $50 and free over 200cm, and I'm the only source of grip wax in the state.

The BootDoctor is famous in Toas Ski Valley, and there are several other shops in Toas and Toas Ski Valley for gear. If you hear about other sources of these kinds of equipment and clothing available in the area, shoot me an email at geatman12@gmail.com.

There are a bunch of ski shops in Durango , CO, that carry everything from skating to AT gear. I will let you google that one or, if you have one that you feel meets our needs let me know. I have found the Backcountry Experience has good gear and cheap shipping.

Getting stuff locally , hands on before buying is preferable. That said, ordering over the internet has several possibilities. REI online will deliver to the local store for free, full "no question asked for 1 year" return policy. Several folks have mentioned shops which they have ordered from with good results. Ors Cross Country Skis Direct (good customer service) and occasionally Sierra Trading Post will have some good deals. Lot of exchanges happen on Ebay as well as Craig's List. Know you are taking a chance if you have not seen / tried on the gear, especially boots. A good rule of thumb is know exactly what you are looking for, if bought without personally seeing it, and make sure there is a “no questions asked return policy” if in doubt.

Just about every place mentioned has outdoor apparel, packs, and other accessories, depending on your price point and needs. Trying on ( especially packs) can be important, look locally first, if possible.  Good luck.