Steve Roholt, working with a program called "More Kids in the Winter Woods" developed an idea for a groomed trail in the Sandia Mountains and gained the cooperation and a funding grant from the USFS. 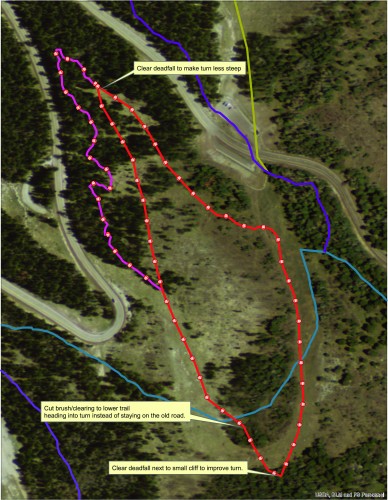 The idea expanded to include some additional ski trail improvements.  Then on Friday, November 21, eight very hard working FOSM volunteers removed several dozen down trees (max. dia. of about 18 in.), brush, and a few small standing trees from a new cross country ski trail high on Sandia Mountain in 2 inches of snow. The new 0.7 km (0.4 mile) trail is located up the mountainside from the 10K South Trailhead parking area and is adjacent to a 1.3 km (0.8 mile) loop that Fredrik Landstedt, UNM cross country ski team coach, groomed last year. The new trail is shown as a bright purple line on the attached map. The loop trail is shown as an orange line. The new route was flagged by Kerry Wood, Sandia Ranger District Trails and Wilderness Manager. The present plan is to set tracks on the new trail with the UNM grooming equipment. 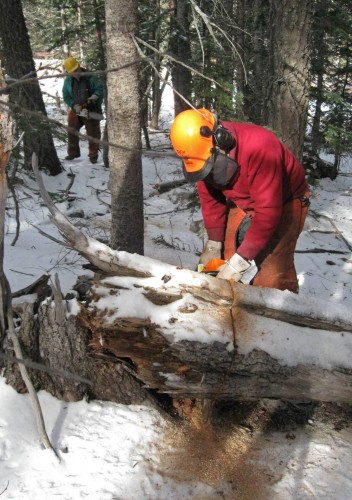 The volunteer crew consisted of two chain sawyers and six swampers (sawyers’ assistants). All down trees in the approximately 8-foot wide trail were cut, and the swampers moved the pieces to the low side of the trail to hold snow in order to reduce the side slope for easier grooming with a snowmobile and track setter. The very busy swampers also pruned many branches along the trail using short pruning saws and a pole saw and assisted with locating flags and the trail route. No large trees were felled, and no trail tread was constructed. 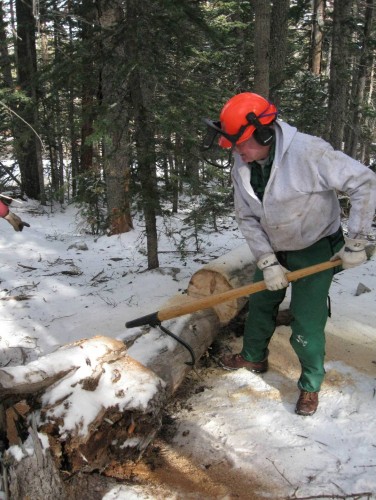 This project is part of the More Kids in the Winter Woods program funded by a USFS grant and coordinated by the Talking Talons Youth Leadership non-profit organization to improve winter recreation on Sandia Mountain and encourage more children to enjoy winter activities.

Cross country skiing in the Sandia Mountains goes back at least to the early 1970s, when the ski club started as the New Mexico Ski Touring Club. So Steve is looking into doing some surveying to find out how much current interest there is in groomed trails in the Sandias like the one just completed. To date, the only grooming of trails has been done by the UNM racing team and a long ago race called the Albuquerque Avalanche, a race sponsored for several years in the 1970s and 80s by the then New Mexico Ski Touring Club.