What are XC, BC, AT & Telemark Skiing?

Nordic skiing is a group of winter sports that includes all types of skiing where the heel of the boot cannot be fixed to the ski (as opposed to alpine skiing). Olympic Nordic skiing events are cross-country skiing, ski jumping, Nordic combined (xc and ski jumping) and biathlon (skiing and rifle marksmanship). Another Nordic discipline is telemark skiing.

Ski touring is an activity where distances are covered on skis. Touring is generally done on trails which are not groomed, and without mechanical lifts to get up hills. Tours can extend over a period of more than one day. Typically, skis, bindings, and boots allow for free movement of the heel to enable a walking pace, as in Nordic skiing, and unlike alpine skiing.

Back-country Skiing (BC) means different things to different skiers. In Europe it is called off-piste, which simply means off-trail. Regardless, back-country skiing does mean skiing in more remote locations where there is no ski patrol, where snow is deeper, ungroomed, with variable conditions. Skiing the back-country in New Mexico and Colorado requires navigational skills, avalanche awareness, and self-reliance. For some skiers, back-country terrain may be moderate, but for others it means skiing using skins to the top of a mountain and down. Accordingly, people use various types of equipment for different types of skiing. In some locations, back-country skiing uses helicopter, snow-mobile, snow-cat or other types of access. Some day trips and overnight trips to huts are considered back-country trips by the NMCCSC. 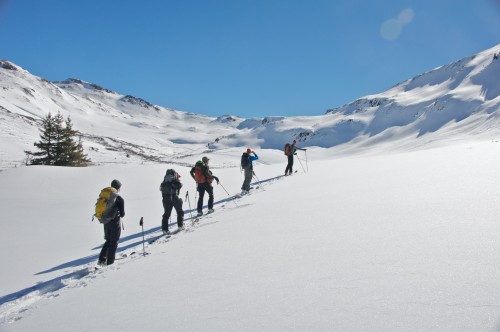 Alpine skiing is commonly known as downhill skiing. Alpine skiing includes different skiing styles. Alpine skis have bindings that lock the toe and heel of the boot to the ski. This is in contrast to free-heel bindings used in Nordic skiing–such as cross-country, ski-jumping, telemark skiing, or ski mountaineering.

Alpine touring (AT), recently popular, involves touring the back-country with equipment that enables the boot heel to be free while skiing uphill, then locked down for alpine-style descents.

Telemark skiing is a technique of turning and skiing downhill in which the heel is free and the turn is made in a lunging position. While the telemark technique can be done in any free-heel equipment, skis, boots and bindings made for telemark skiing are sturdier than cross-country touring equipment to withstand the more aggressive turning and downhill uses.

A skier's choice of equipment should be based on the type of skiing and terrain one intends to pursue.

If you are new to this topic, also see the NMCCSC Terminology document on the website (nmccskiclub.org) for explanations of camber, bindings, side-cut, etc. This document does not discuss brands or models, but highlights the uses of different types of equipment so that readers can begin to research current models on their own. Reviews of current brands and models are available on-line and should note the type of skiing and terrain for which equipment is designed.

While experienced skiers have their preferred mode of skiing and gear, there's no one right way, it's all fun. Find what works for you. Many experienced skiers eventually own more than one pair of skis, boots and bindings to take advantage of different terrain, skiing styles, and the best use of various equipment.

Traditional, classic cross-country skis are generally used where a ski track has been set such as at a developed Nordic ski area. If you prefer flat to moderate touring on groomed tracks or packed tracked trails, light, stiff, double camber skis, New Nordic Norm (NNN) bindings and boots are a good choice. These classic xc touring skis are light, narrow, longer than other ski types, have very little side-cut if any, and have double camber (vertical arc of the ski-i.e., how it lifts off the floor). Some have metal edges, others do not. They are designed for flat to moderate terrain, kick-and-glide forward movement. They can also be used for kick turns and step turns in which the ski is lifted from the surface, or in the snowplow position. Double camber helps speed the forward motion of classic kick and glide. NNN boots are low, soft and comfortable. Waxable and non-waxable skis are available. Generally, waxable skis perform better if the skier is knowledgeable about the use of waxes. The non-wax skis are easier for inexperienced skiers.

For cross-country skiing off the groomed track, into powder snow or onto moderate slopes, skis and bindings that are side cut and sturdier, and higher and stiffer boots are a better choice than classic xc skis and NNN boots and bindings. Classic xc boots are low and soft, and NNN bindings have minimal boot contact, and only pivot the boot forward and back. Consequently, they don't translate the skier's sideways body movement to the ski effectively. Therefore, if the skier desires to ski untracked powder snow or carve turns, sturdier equipment is preferable. Three-pin bindings, for instance, offer contact with the side of the boot. For back-country skiing, there is a range of equipment appropriate for a range of terrain, snow conditions, and skier ability.

Three-pin bindings with a heel cable are at the lighter end of the back-country spectrum. Heel cables range from light to very strong and stiff. The greater the tension on the heel, the better control while turning. Some 3-pin bindings have two modes, downhill and uphill, differentiated by more or less tension and contact with the toe of the boot, respectively. The boot pivots either in front of the toe or from the ball of the foot, depending on the setting. It's easier to turn in these bindings than in NNN. They are a good choice for ungroomed, moderate back-country terrain.

The steeper and deeper the terrain and snow, the sturdier the skis, boots and bindings should be. The spectrum of equipment provides a spectrum of control. The more side cut the ski, the greater the boot contact and stiffness of the binding, and the higher and stiffer the boot, the better they translate the skier's body motion to the skis for turning power and control in deeper steeper snow.

If you plan mostly back-country travel and at least occasional downhill turns, look at the range of wider, single camber, side-cut skis, heavier, stiffer bindings and higher, stiffer boots. These are more stable and durable for the greater forces generated in back-country skiing, (also when carrying a heavy pack, as needed for an overnight hut trip). Wider skis are more stable and float better in deep powder. Side cut creates turns. Single camber affords flexibility, durability, and multi-directional movement. Such skis are appropriate for back-country skiing in deeper, untracked, or steeper snow and where more turning, climbing and descending are required. These are the conditions in many back-country tours and overnight hut trips. If you desire more turning, look for the stronger and stiffer equipment.

Heavy duty equipment includes telemark and modern alpine touring (AT) equipment. Alpine touring and telemark skis are designed for mountain skiing and ski mountaineering often on steep slopes, difficult terrain using tight turns. These days, telemark and alpine skis are shorter than cross country skis, are wide and have generous side-cut. Different models are made for deep, soft and hard snow conditions. Newer models of telemark and alpine touring skis are increasingly light, but very sturdy. Skis sometimes have a notch in the tail to accommodate the clasp at the base of climbing skins. A hole a

the tip of some models can be used to build a rescue sled from the skis. Both AT and telemark bindings allow for free-heeled climbing using climbing skins (textured strips attached to bottom of the skis). AT bindings allow the boot heel to be locked for extended downhill alpine style skiing, while telemark bindings do not lock the heel during either uphill or downhill skiing. Bindings have releasable climbing wires or platforms to support the heel during very steep ascents. Newer telemark bindings are releasable in event of a serious fall or avalanche. Some bindings also have walk and ski modes locking the toe from the ball of the foot or releasing so the boot pivots freely on a hinge. AT and telemark boots have walk and ski mode. Flexing the boot at the ankle eases uphill climbing, rigidity enhances downhill turns. Boots are tall and rigid. Combined with stiff bindings, they effectively translate the skier's turning body movement to the ski.

To Wax or Not to Wax?

Your Decision. Here's how. 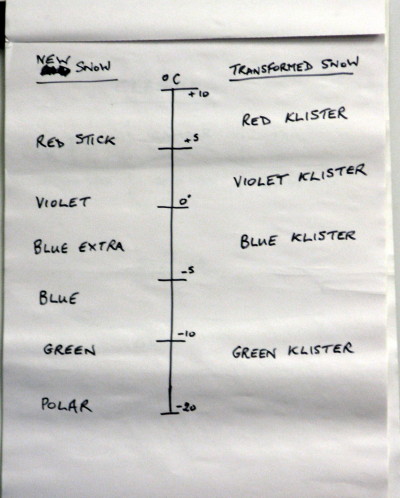 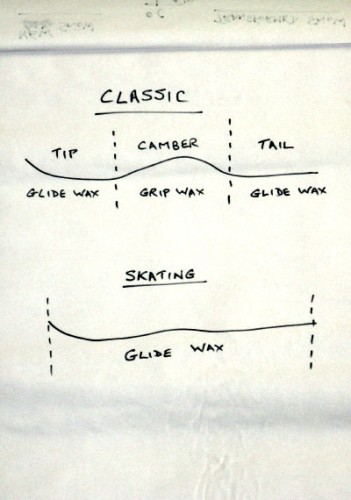 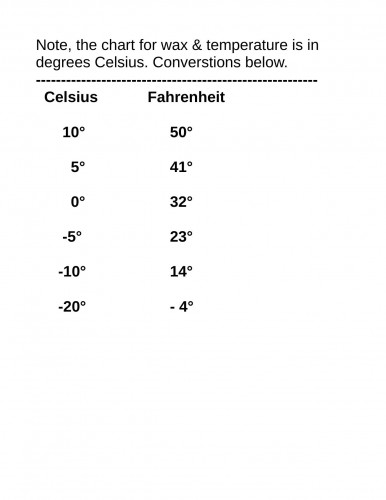